Wat Phan On is one of the smaller temples in Chiang Mai. It has one of the most impressive, and shiny, chedi in the city. 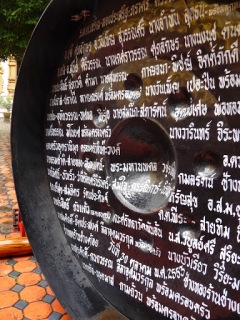 In the temple’s courtyard there is a large tree with Buddha images beneath it. The large number of bells around the temple complex can be rung by Buddhists and tourists alike.

There are several umbrella sheltered stalls selling food and other items to the steady throng of visitors. The temple gets very crowded during the Sunday Night market due to its proximity to the action. In fact, its courtyard fills with stall holders selling Thai snack food. 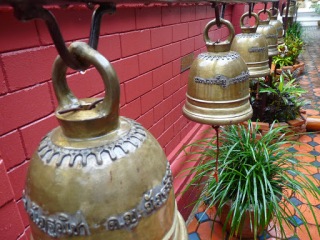 The blinding gold chedi, built in 2007,  has red niches on all of its four sides in which Buddha images are enshrined. It’s called Sareerikkatartsirirak Pagoda.

We’re nearing the end of my temple bagging (for now!) Just a couple to go and then it’s off to the jungle and mountains for trekking, elephants and white water rafting!