My grandparents visited Mostar, formerly in Yugoslavia, over 25 years ago and I had always been charmed by the photographs of the old bridge that is its most famous image.

Sadly the grand old bridge was completely destroyed in the 1990s during the Bosnian war but I have always wanted to take a trip to see the city.

Cruising on the wide, expansive sweep of Croatia’s A1 highway, we headed to the checkpoint, passports in hand and confident of a relatively pain free journey.

After assurances from the somewhat brusque border patrol guard that Mostar was easy to find “yes, yes, you follow signs!” we were on our way! 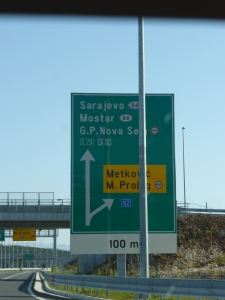 Early progress was good as we found the same huge, empty roads that we had grown accustomed to in Croatia.

We passed lots of clear signage, assuring us we were heading in the right direction.

Growing up in the 90s, with the headlines full of the horrors of the war, certain place names such as Sarajevo still have a certain impact, even decades later. 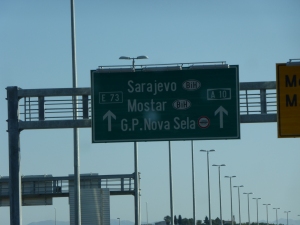 Our initial direction related optimism was soon to be thwarted however, as we followed the dual carriageway to a small village we passed heaps of rubble, a stationary JCB and then the dual carriageway just ends. In its place a single track, dusty road snakes into the distance!

There appears to be some sort of disagreement between the two countries about the road, so it stops!

Wonderful . . so the the big signs might have said Mostar sadly however the road just “disappears”. Our sat nav from home only featured one Bosnian road and it didn’t happen to be the one we were on unfortunately.

Equally useless was sat nav that came with the hire car. It took about an hour to boot up and then simply refused to acknowledge that it was actually anywhere at all. . . . sigh.

So for about an hour we were utterly and totally lost in Bosnia. Passing small villages on a dusty track, unsure if we were ever going to get out, let alone reach Mostar.

Then suddenly, an actual road with signage reappeared! Not entirely sure if this was the town of Metkovic or somewhere else entirely . . (bit rubbish on directions TBH)

Either way, miracle of miracles we’d managed to keep heading in the right direction, and we were on our way again! 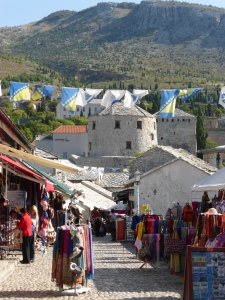 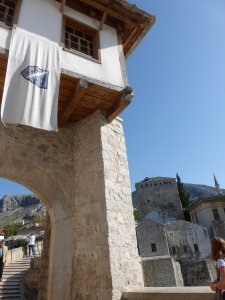