Much as we enjoy travelling to exotic,warm and far flung destinations, we don’t have the time or money to always be heading abroad. But lucky for us we have the delights of Derbyshire and the Peak District on our doorstep.

So last weekend we headed out to explore some of the sights within a stones throw of home.

First up – Pooles Cavern in Buxton, one of the country’s best show caves. It’s a 2 million year old, natural limestone cave that was officially opened as a show cave in 1853 and has 310 metres currently open to visitors.

Leaving behing the damp, dreary and frankly uninspiring Derbyshire weather we headed into a subterranean cavern, lit by LED lights that served to illuminate some of the highlights of the imposing cave.

Oddly named rock shapes include the Flitch of Bacon and the Poached Egg formations were revealed, looming up out of the darkness, while the ever present rushing sounds of water reminded us of the proximity of the nearby River Wye. 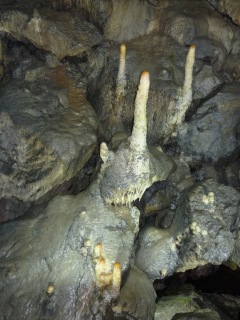 The Poached Egg formations – if poached eggs were four feet high and covered in primordial ectoplasm . . 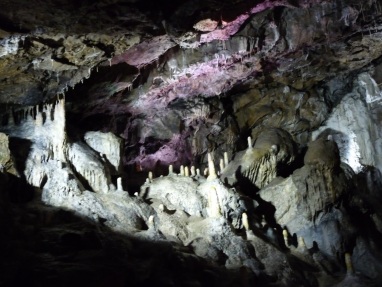 The cave is named after an infamous outlaw who is believed to have make the dank, dark cavern his home. But he was not the only inhabitant, throughout the ages many people have made the inhospitable hole their home, workplace and site of worship. 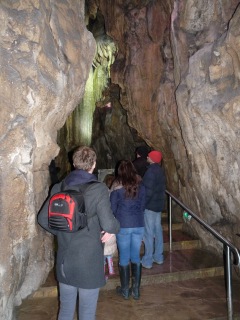 Some modern day cave dwellers check out the dimensions of the vast underground cavern! 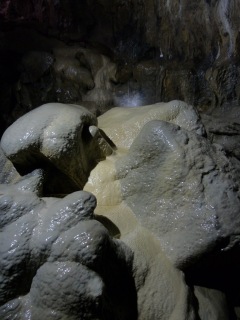 After going deep underground we headed outwards and upwards to Solomon’s Temple, an old Victorian Folly on the top of an old Bronze age barrow. 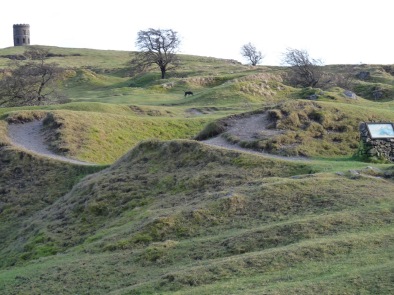 It is situated in an undulating, green landscape shaped by the old lime works that were there years ago. 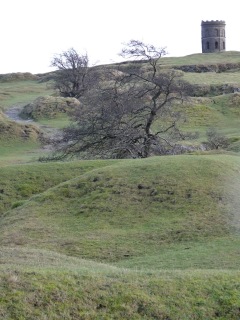 That’s all from drizzley Derbyshire for now!!