Here’s a final post about the pretty hillside town of Taormina before we head even further up the mountains to Castelmola. 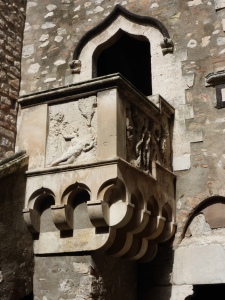 By now the sun is blazing and the narrow streets are congested with tour groups and serious shoppers. But there’s still a unique charm to be found in the meandering lanes and hidden corners.

Whether you’re marvelling at the ornate stone carvings of the old buildings or rummaging for the ideal souvenir, you can easily spend a few hours meandering this tiny town. 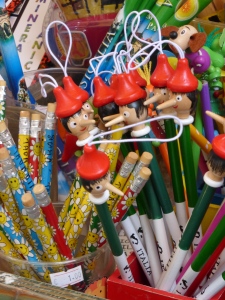 If pencils and aprons aren’t your thing then you can take your pick from the mountains of tasty local produce.

Everything is so photogenic, even the packets of pasta! 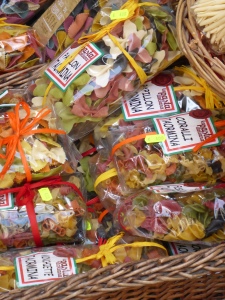 Don’t forget to look up though or you’ll miss quirky little details such as these colourful ceramic heads set into the windows.

Peering down shady side streets or peeking through rustic doorways gives you tantalising glimpses of the hidden lives of the town’s inhabitants.

Even the dullest of walls is enlivened with intricate carvings or detailed stone work. 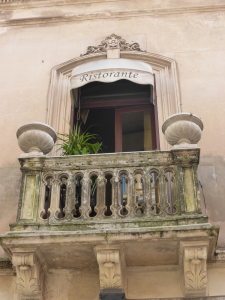 Headto the town’s main square Pizza IX Aprile and you can admire beautiful panoramic views out over the Bay of Giardini Naxos. 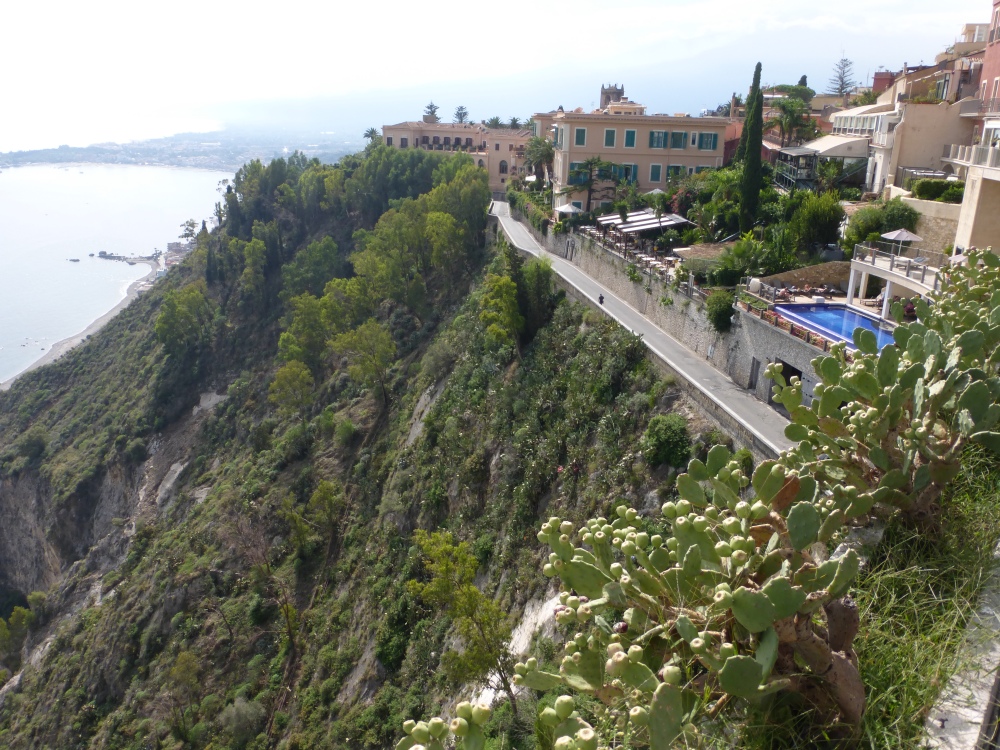 Below is Pizza IX Aprile, Taormina’s main square.  The imposing pastel facade of the Church of San Giuseppe, looks out over the square.

The church, dedicated to St. Joseph, was built in the seventeenth century. 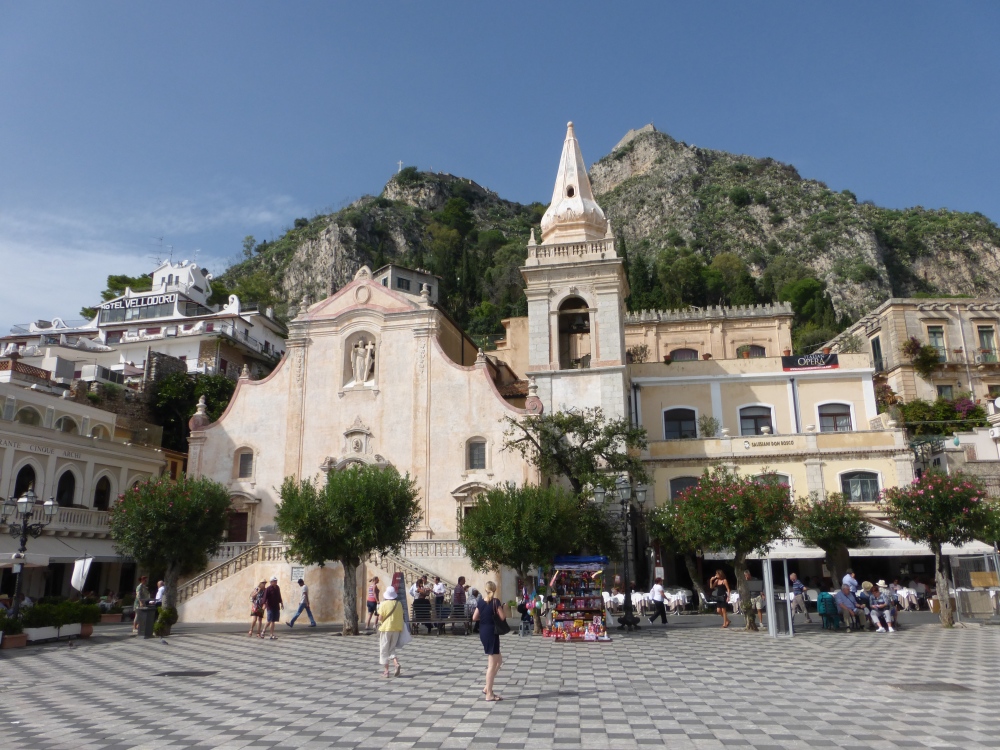 The church was the centre of the “Brotherhood of the souls in Purgatory” so in the facade and inside the church you can see human figures in the flames that symbolize purification from sin. Cheery! 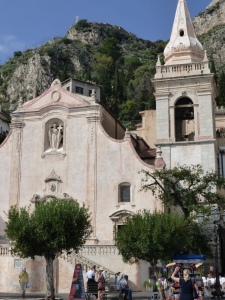 Below is the clock-tower that acts as an entrance gate to the part of the town that historians call “the 15th century area”.

Originally dating back to the 12th century, the tower was razed to the ground during a French invasion in 1676. What you see today is a reconstruction from 1679, when a large clock was added to the tower. 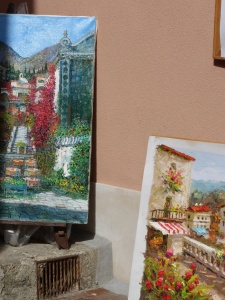 It continues to be a home for artists who capture the stunning scenery around the town in vivid colours for you to take home and hang on the wall.

Painted carts are a symbol of the island although I didn’t manage to catch sight of a whole one. The nearest I came was this ornately painted cart wheel.

Below the man takes a break on the Piazzo Duomo fountain. This Barocco style fountain, built in 1635, is in Taormina marble. 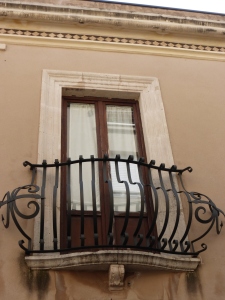 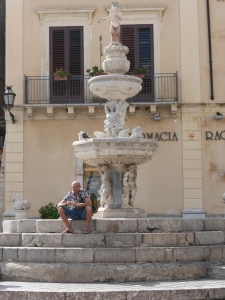 Ancient architecture sits cheek by jowl with cheerful tourist tat such as Limoncello aprons and intricate wooden toys that Geppetto himself would be proud of. 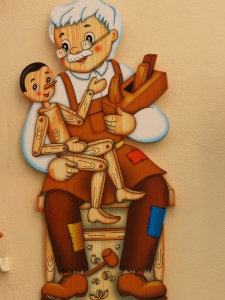 You’ll more than likely spot lots of puppets or marionettes which are a core symbol of Sicilian folk-art. The marionettes are the major props in the Opera dei Pupi, a traditional form of Sicilian entertainment.

The subject matter of the Opera dei Pupi comes from Sicilian history, works of literature, folklore and comedy.

A common performance pits Norman knights against the Saracens and you can see these puppets above and below. 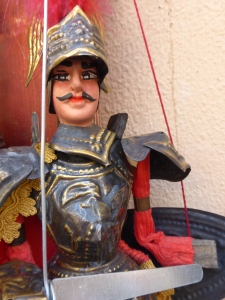 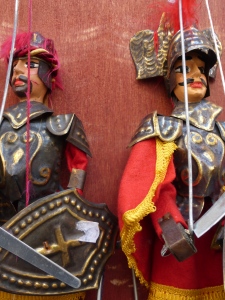 Below is The Duomo, Taormina’s main cathedral, which was built around the year 1400 on the ruins of a small mediaeval church. Plus close up detail of the Duomo fountain.

Everywhere you look in the town you can find colourful artwork lining the streets and festooning the walls.

The man refused to take a peak under the cardboard dude’s posing pouch, spoilsport!! 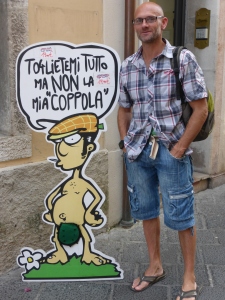 Heading back along Corso Umberto, the town’s main street, I am distracted by the colourful fruity spectacle of ice lollies in every conceivable flavour.

Lemon, raspberry, strawberry, orange. Whatever your fancy, there’s a sweet treat with your name on it!

Shops and artwork line the streets offering souvenirs to suit every pocket whether it’s cute little miniature bottles of Limoncello or the tiny yet detailed Martorana Fruit marzipans. 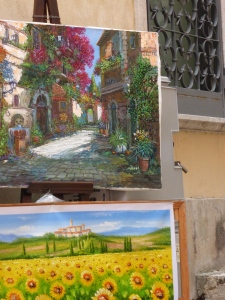 I was utterly distracted and enchanted by this particularly vibrant side street stall that was groaning under the weight of Italian specialities such as lemons, chillies and pasta.

Just in case you’re tempted, signs give you far warning of the hot and spicy nature of the tiny yet powerful chilli seeds.