Leaving Hiroshima behind the next stop on our tour is the fascinating city of Kyoto. A heady mix of bustling modern city and hauntingly beautiful traditions.

Before we even get into the city however I am distracted (it doesn’t take much TBH) with a selection of colourful magazines. 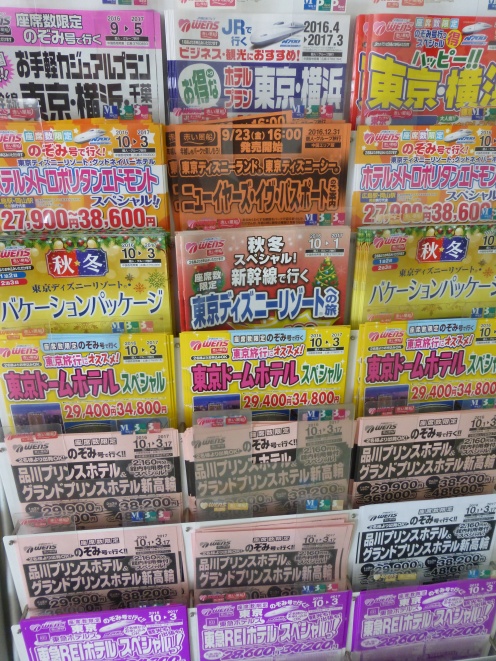 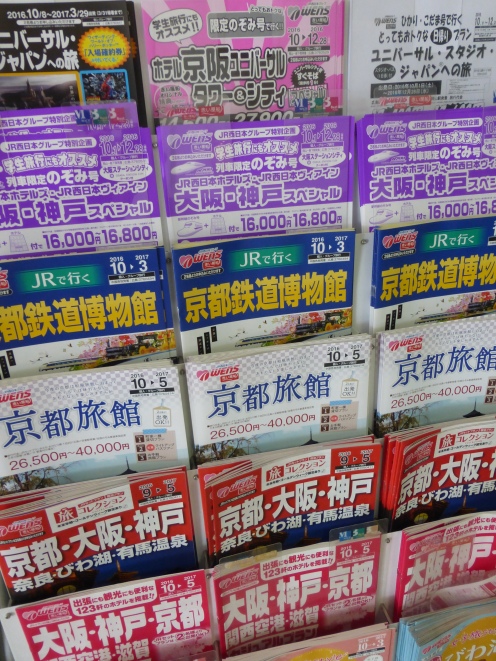 Then a cute little shrine, festooned with more colourful chains of origami cranes. 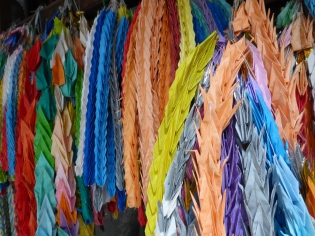 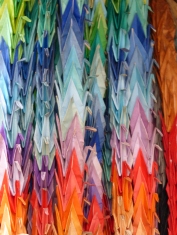 Kyoto is famous for its illusive  Geisha and their trainees.  Apprentice geisha are called maiko (舞妓), literally “dance child” or hangyoku (半玉), “half-jewel” meaning that they were paid half of the wage of a full geisha.

We’re on the lookout but for the time being we had to be content with stalking tourists and locals who like to parade in beautiful traditional costumes at the weekends. A pastime that I decide to call “Butterfly stalking .  . .” 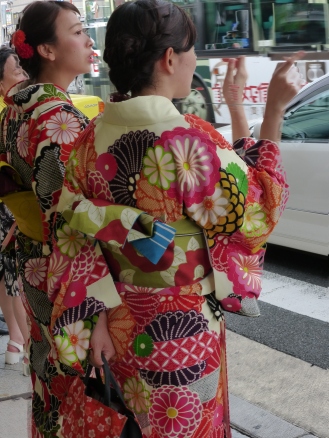 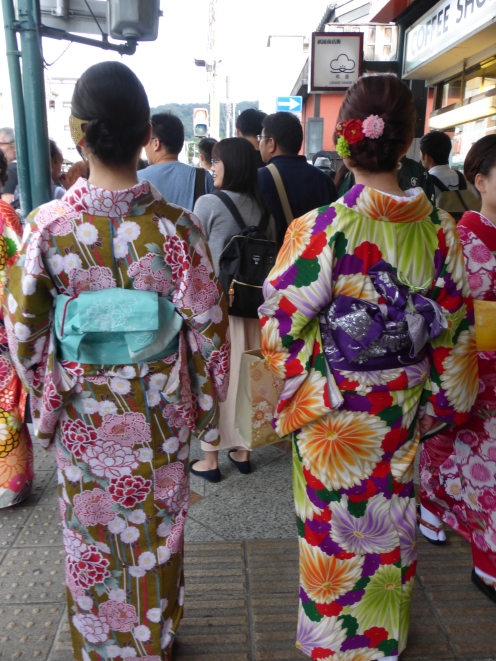 We then duck into some tiny alleyways to enjoy some of the traditional architecture that still prevails in Kyoto.

Below is Ishibei-koji Lane an atmospheric pedestrian-only alleyway that is one of the most perfectly preserved of Kyoto’s old streets. 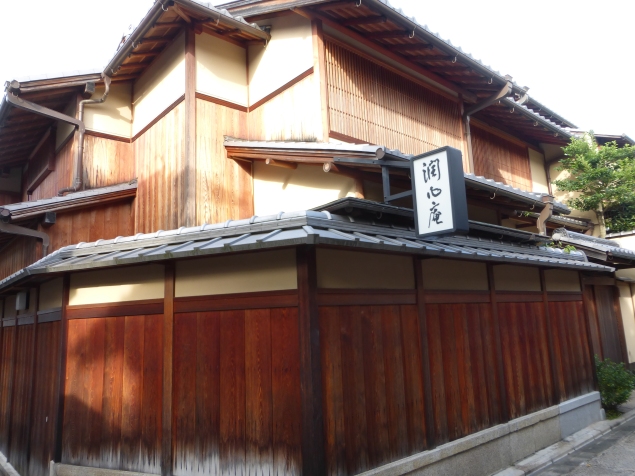 If you manage to find the hidden entrance to this gorgeous little slice of history then you’re in for a treat.

Ishibei Koji Lane means stone moat and is a twisting, turning lane full of traditional eateries, ryokans and private houses. It is the stuff of fairytales, definitely a place to spot a Geisha or two . . . and we did!

We almost literally bumped into two exquisite maiko who were lost and looking for their tearoom!

Usually a happy snapper I was so gob smacked to see them that I just gawped at them. They stood in front of us for a good two minutes before tottering off up the lane to be grabbed for a selfie with some American tourists!!

Then it’s onto the twin delights of Sannen-zaka and Ninen-zaka. These steeply sloping Imperial era shopping streets are steeped in history and feel like (very crowded) film sets. 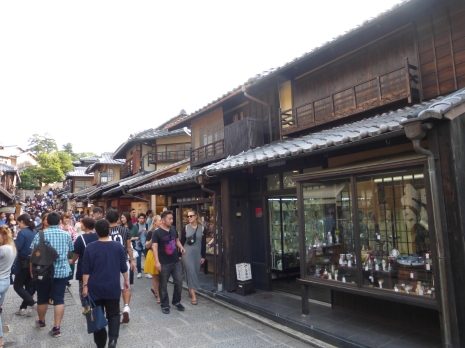 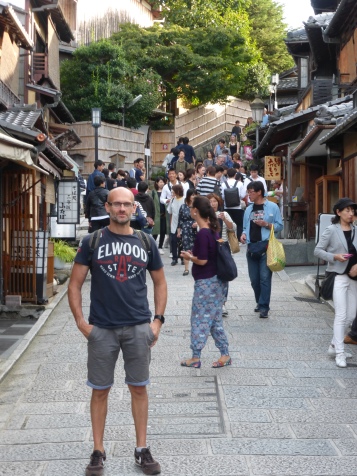 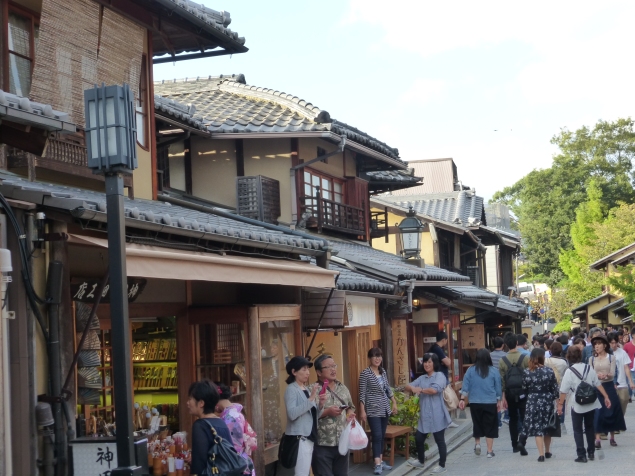 Here it is possible to imagine how Kyoto, and indeed Japan itself, would have been before crass modernity intruded. 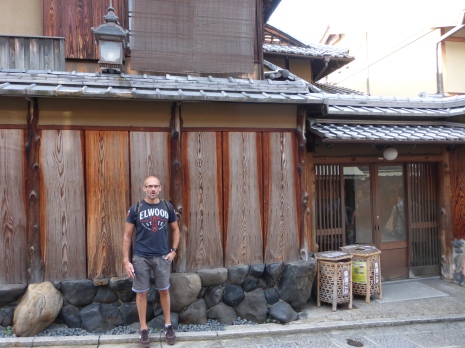 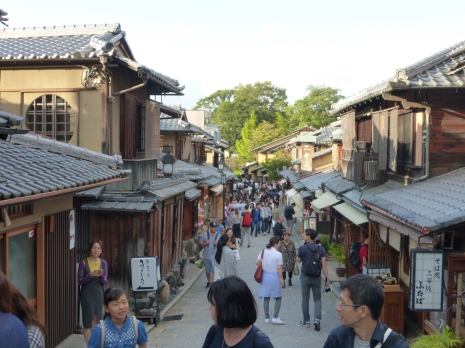 Even with the throngs of visitors it is still a picturesque sight and one that we’ll return to time and time again!